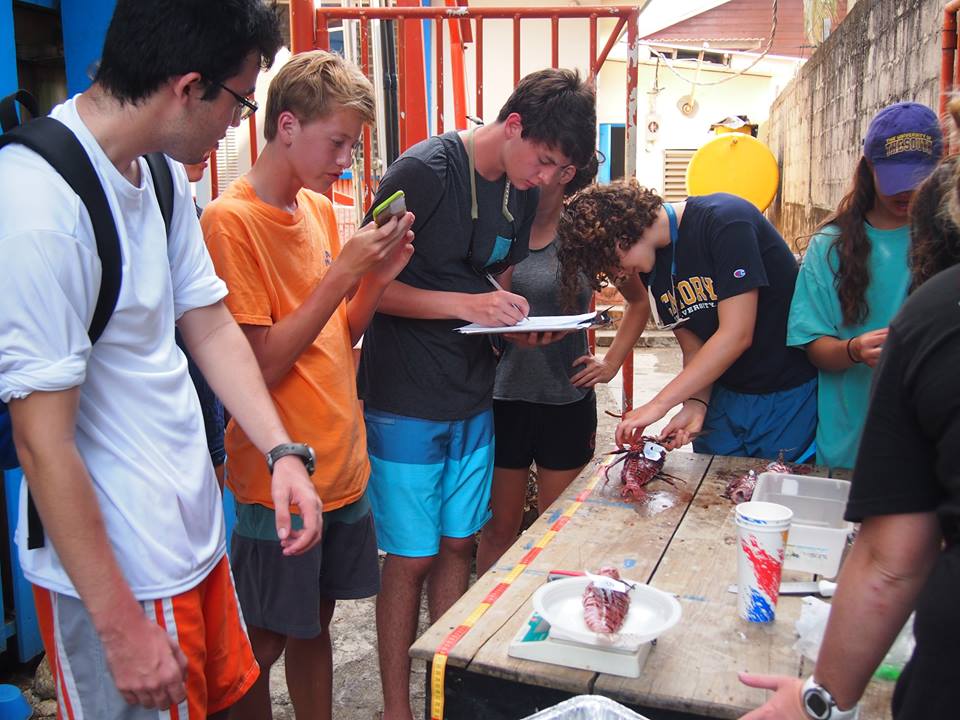 Today Ocean Matters set out to dive on a mission to hunt the invasive lionfish. Yesterday we were taught about how dangerous this predator is in the Caribbean. They disrupt food webs by eating anything and everything while disrupting coral and other reef residents from the natural symbiotic relationships that protect them. Local Honduran regulations limit who can spear lionfish so only a diver from Utila Lodge wielded a spear. Our jobs were to point out lionfish we saw hiding in crevices. It’s estimated that in order to maintain current populations of lion fish, which are already dangerously high, 27% of the population needs to be culled every month! That’s why our job today was so important. Unfortunately we didn’t spear any of the beasts during our dives this morning, but another group from the Utila Lodge that dove deeper than us caught 25 lion fish! They were found at about 100 feet deep, whereas we were only diving at 60 feet maximum. Our group then helped the Whale Shark Ocean Research Center (WSORC) dissect the lionfish and collect data that will be sent to a PhD candidate at Oxford University studying the fish’s presence in the Caribbean. We helped the researchers measure lengths of bodies, the size of the mouth gape, their weights, the contents of their stomachs, and their age by extracting their otoliths. Otoliths are found close to the brain and when alive help fish with balance. They also grow in size as the fish matures. Rings form around the otolith and counting every ring tells you how many years old the fish is. This has been a great way to practice our diving and learn about the importance of protecting our ecosystem, all while gaining exposure to the world of marine biology research. Devon Sullivan, 18, is a lifetime resident of Sarasota, Florida and found her passion for marine science and conservation through her four year tenure as a member of the Saint Stephen’s Ocean Academy, of which she will be one of the first of 7 graduates. She plans to double major in Spanish and business administration at Emory University to hopefully attratct more attention internationally to protect in our oceans.

Reagan Sullivan, 18, first discovered her dedication to the ocean when she became scuba certified at age fourteen. She will be attending Lehigh University to pursue a degree in Marketing.