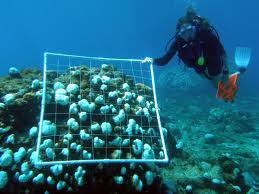 [dropcap]B[/dropcap] efore we can start our research project, we have to build the quadrats–the square plots with which we will measure coral vs. algal cover on the coral reef. Each quadrat is made with PVC piping drilled with holes to allow it to be both water proof and to sink onto the reef. We string the square PVC frame with strong string marked at regular intervals to create one hundred boxes. Each box thereby represents one percent of coverage for the species laying underneath. We are collecting data in two teams of six divers, so each team will need a quadrat. Once underwater, quadrats are then lain against a transect line—a measuring tape that is essentially randomly dropped by two divers to cover a designated area of the coral reef. Quadrats are moved along the transect line to cover both sides of the transect and sample the benthic (bottom) coverage. Two divers will hold the quadrats as steady as possible above the coral reef in order to avoid touching the coral, which has a vital protective mucous membrane that it is important for the coral’s health not to remove. The other four divers will record percentage of both algae and coral cover (yes, we learned all the Latin names to species level) and, noting any diseased or bleached coral as well. We then apply statistics to our data, looking at both coral vs. algal cover and coral diversity as indicators of health. The information is used by the local DOE (Department of the Environment) as part of their very critical monitoring of the reef. Over the years, we have seen the coral coverage on the reef off of Sunset House (and Seaview) decrease in coverage from the low twenty percentages to as low as eight percentages in an El Nino year.

We’re happy to report that our research has in the past been written about in the national Caymanian Press.
https://oceanmatters.org/article.htm