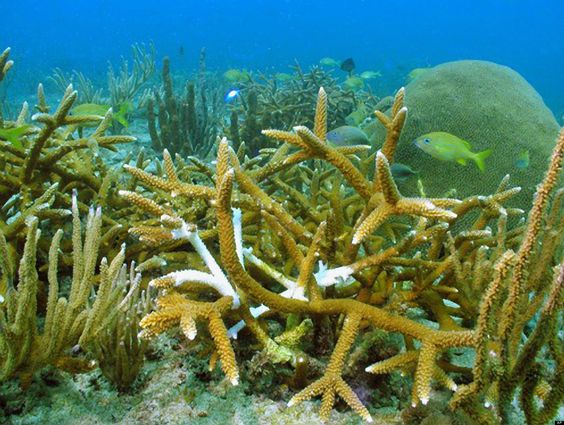 In the mid-1990s Ocean Matters was in Grand Cayman, British West Indies, when the back-end of a hurricane blew through. Five staff members and twenty students were spread across two large beachfront villas on the north side of the island. The locals were nonplussed about the event. “Hunker down,” they advised us and then laughed heartily at the look on our faces.

We pulled metal shutters across the large windows, secured outside items like chairs and hammocks, and waited. The evening passed uneventfully, if not strangely, as we could only hear the eerie whistle of the storm; our view to the outside now blocked. We had no idea what was happening as we watched movies and retreated to bed.

The next morning, we awoke to blue skies. Flotsam and jetsam littered the beach, but there was no visible damage. We planned our afternoon data dive that day carefully, as the surf was expected to be worse than normal. Our shore dive entry required us to navigate a cut in the reef crest, right at the point where the surf usually breaks. If you timed it right, you’d hit the narrow cut in the coral just as the surf retreated. One swift kick of your fins and you’d be pulled out to deeper water in some bizarre reversal of being born. If you timed it wrong, a wave would pummel you against the bony coral. We wore wetsuits despite the warm waters just in case.

Every day, there are winners and losers on the reef in a never-ending competition for space and resources. While a large storm like a hurricane might shuffle the deck, it largely also works to keep the same cards on the table.

The shallow part of the reef is home to soft coral and seafans, but as you get deeper into the wave action zone, branching corals such as Acropora cervicornis (elkhorn coral) and Acropora palmata (staghorn coral), reach fingers and palms upwards towards the life-sustaining light needed by the symbiotic algae that lives within its tissue. Large mounded shapes like Diploria (brain coral) built to withstand wave action also dominate. These two morphologies–branching and mounding–compete for space in a tortoise and hare race. The hare, or thinner, elegant branching corals expend their energy budget on being fast growing; while the tortoise, the heavy mounding shapes invest in density, growing at a much slower rate. The branching coral is more fragile, if not fecund; while the mounding coral is more hardy. It can take a brain coral 900 years to grow to the size of 6 feet wide. Left to a level playing field, the faster growing branching corals would eventually dominate on a reef, as their reproduction strategy includes fragmentation, where pieces of their broken fingers re-establish themselves on newly cleared surfaces by herbivores and other reef dwelling animals. Periodic intense disturbances like a hurricane give the slow growing mounding corals a temporary advantage, leaving fields of branching coral reduced to rubble. The tortoise can temporarily catch up to the hare.

Biologist Joseph H. Connell used this phenomenon to describe his theory that it is intermediate disturbance (or moderate disturbance) that maintains the high levels of species diversity on a coral reef or rain forest. Low levels of disturbance would give advantage to the hare; while high levels of disturbance would give advantage to the tortoise. Like Goldilocks found out, episodic disturbance, or a large storm or El Nino event every 5-7 years is just right and helps maintains the very diversity of the reef that fuels the engines of productivity in the ocean. Every day, there are winners and losers on the reef in a never-ending competition for space and resources. While a large storm like a hurricane might shuffle the deck, it largely also works to keep the same cards on the table.

The coral reef is disappearing at a rate five times that of the rainforest.

The coral reef evolved with these large storms as an acute, if not predictable, pulse. The coral reef did not evolve to also handle a background of chronic stress like those relatively recently introduced by human activities. Warming and acidifying waters from extra carbon in the atmosphere; overfishing; pollution; and habitat destruction weaken coral reefs and their inhabitants. Chronic stress is considered high disturbance and would lower diversity on a reef. Adding a hurricane to this already high disturbance can make it more difficult for a reef to bounce back, changing its diversity and assemblage.

That day on the reef so many years ago, we swam over fields of broken branching Acropora coral that just the day before had stood sentinel in a living assemblage of calcium carbonate as a wall of protection to the land. Now twenty years later, the status of those branching corals, once abundant and quick to rebound, is considered to be functionally extinct. The deck of cards now in our hands is one of declining species. The coral reef is disappearing at a rate five times that of the rainforest.

We might not be able to change the rate and intensity of oncoming hurricanes. But if we address our carbon footprint, reduce ocean pollution, halt habitat destruction, and stop overfishing, we can give coral the time they need after a major event like Hurricane Irma to rebound as nature intended. The system that maintains diversity on the reef and drives the gears of our life support system on earth depends on the choices we make with the remaining cards in our hands. What will be our next move?

One thought on “What Happens to the Coral Reef During a Hurricane?”